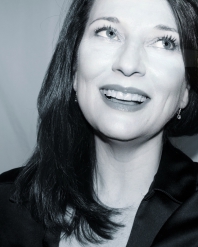 I was the only daughter of a very successful business couple, who was brought up to take over quite a few companies in the security industry. However, I was always more artistically inclined and it wasn't a role I wanted to play.

You never know where decisions or life experiences are going to lead you. A family breavement then lead me to explore and become qualified in Aromatherapy, Reflexology, Crystal Healing, Hypnotherapy and Astrology. Then, after a chance conversation in a waiting room, I began writing Astrology Horoscopes when premium rate lines made their debut, crippling phone bills around the country and from here my voiceover career was born! From there, the same production company asked if I could write any other lines for them so we had a few slightly crazy, how to hook that lover type of lines, that were usually listened to by those fancying a giggle once the pubs had closed. (wasn't that a polite way to phrase it?!)

From there, I began writing horoscopes and recording them for radio for Eclipse FM and as a guest for BBC Radio. Then for television I worked for Oracle, Sky, Teletext, and Cable TV. Whilst doing this, I was also the astrologer for Asda, Somerfield & Gateway and Eastern Independant.

Running consecutively, I was also producing voiceover CD's for government bodies such as MICE, and educational voiceovers, and this doesn't include various bits of reporting and presenting (having compared for 300 drunken Bloomberg, I can assure you I've earnt my stripes!), but voiceover work is where my heart lies. This all spanned 1987-2002.

So now I am really happy to be returning, complete with an even sharper business understanding, and a wealth of experience working in Sales, Marketing, and with Executive Boards in large global corporations that give me, as an artist, a more complete view from both the business and the creative side, so that you get exactly what you are hoping to achieve. And if you're looking for the slightly crazier aspect just refer to the start of my career!